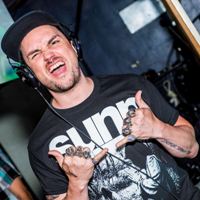 Dieselboy
"Dark Drum and Bass artist"
Bio
At a time when headline "DJs" shamelessly play pre-programmed - even pre-recorded - sets and the masses mindlessly embrace the charade, Dieselboy - The Destroyer - stands out as a rare virtuoso of the art and craft of live DJing. His complex, high voltage, take-no-prisoners sets have created legions of loyal diehard fans around the world. Arguably no other DJ mixes live on four decks with more precision, imagination, intensity, energy and finesse.

In the history of electronic dance music, no one comes even close to matching his legacy of epic dramatic mixes, each a timeless star in his signature constellation. Dieselboy has, in fact, elevated the themed DJ mix to the realm of fine art.

For over two decades one of the world?s most influential ambassadors of drum and bass, Dieselboy (Damian Higgins) is America?s most iconic underground bass music curator and pioneer.

He is also a passionate connoisseur of books, film, and food which he has written about and been featured in the food, drink and popular culture online zine First We Feast.

Dieselboy was the first drum and bass artist to chart a single on Billboard?s dance chart with ?Invid? in 2000, and was the first American voted into the UK-based Drum & Bass Arena Top 10 DJs online poll in 2004. He's been featured on magazine covers, interviewed for documentaries, TV and radio, heard on MTV, ESPN and numerous video games, and sponsored by DC Shoes and Pioneer Pro DJ.

In 2002 Dieselboy founded Human Imprint, North America?s most prolific, dynamic and innovative drum and bass label, and is co-founder of dubstep/electro label SubHuman, both now under the umbrella of Planet Human. Planet Human is beloved by its fans for the quality of its next level high energy releases by international vanguard artists including Bare (US), Mark Instinct (Canada), Mayhem (US), Muffler (Finland), Nerd Rage (US), Nightwalker (UK), NumberNin6 (US), Pixel Fist (UK), Subshock (Spain), and Zardonic (Venezuela).

Dieselboy?s DJ career began in northwest Pennsylvania DJing high school dances. While a student at the University of Pittsburgh he learned to beat-match vinyl live on college radio and played trance, happy hardcore and breaks at house parties. His 1994 mixtape ?The Future Sound of Hardcore? led to out of town bookings and his expanding popularity and technical skills led to the honor of being the first American asked by a British drum and bass label to mix a compilation (?Drum & Bass Selection USA,? 1996).

In 1997 Dieselboy moved to Philadelphia to be drum and bass buyer and T-shirt designer for seminal rave culture/record store 611. In 1998 Dieselboy was the first American drum and bass DJ to be nominated for Best Drum & Bass DJ at the Global DJ Mix Awards and tied with LTJ Bukem. From 1998 to 2004 Dieselboy hosted North America?s premiere drum and bass weekly ?Platinum? at club Fluid.

Dieselboy continuously raises the bar for DJ mixes as art forms, and each from 1992 to his latest tour de force ?Dieselboy - The Destroyer? stands the test of time. State of the art showcases of producers and graphic artists of each respective musical era, Dieselboy?s mixes have been described as ?cinematic? and ?intoxicating.?

Dieselboy?s goal in creating each mix is ?to make the most intricate, layered, nuanced, amazing drum and bass mix ever done. Period.? His sixth sense for sublime exquisite blends - "the sound of heaven crashing into hell," as he once described it - is as transcendent as it is legendary.

In his dramatic intros (a Dieselboy trademark) his narrators (including the late movie trailer voice actor legend Don LaFontaine and Peter Cullen, the voice of The Transformers' Optimus Prime) describe epic - from sci-fi fantasy to soul-crushing apocalyptic - scenarios. (The intro to "Wake the Dead" is a thinly veiled reference to the death of the art of DJing ? a theme that resonates amongst fellow technically skilled DJs, fans and dance music aficionados.)

An inspiration for generations of DJs, Dieselboy?s longevity and relevance in a mercurial industry is a tribute to his relentless drive to create ?amazing? experiences for his fans in their iPods and at his infamous explosive live shows.

Dieselboy fans praise his skills as ?genius.? Says The Destroyer: ?I don?t fuck around.?
Source: www.facebook.com/Dieselboy