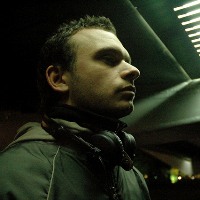 Andy C
"Dark Drum and Bass artist"
Bio
Andy Clarke began experimenting with programming breaks as a teenager. He met Ant Miles at the studios where he was working through a family connection. They began working together in Ant's converted garage studio where Andy nurtured what was to become a talent for chopping up and re-programming breaks. Andy decided to set up his own label in early 1992 with a budget of ?1000. RAM - named for his astrological sign, Aries - launched his solo debut with RAMM001 - Sour Mash E.P.

At 20, together with Ant, Andy created 'Valley of the Shadows (31 Seconds)' under their Origin Unknown alias. Often referred to as the 'darkcore prototype', the track won Best Hardcore Tune at the 1993 Hardcore Dance Awards where Andy also collected the prize for Best Newcomer. His DJing career progressed at a meteoric rate. He had a show on pirate station Cyndicut FM and secured slots at key raves including Imagination, Club Elevation, Dreamscape, Innovation and Telepathy, where he became a resident. By 1994 together with Ant, he assumed another alias, Desired State, under which he created 'Beyond Bass' and 'Here And Now'. In the same year, he began to branch out with collaborations, connecting with DJ Randall to create the dancefloor smash hit, 'Sound Control'. Subsequent studio hook ups would involve Shimon and Moving Fusion.
Origin Unknown's 1997 album, 'Origin Unknown Presents...Speed Of Sound' won Best Dance Album at the Kiss FM Dance Awards and Best Album at the Hardcore Dance Awards, where Andy also collected the gong for Best Producer. The 1998 follow-up, 'Origin Unknown Presents...Sound In Motion', preceding the birth of RAM Trilogy, Andy C's studio collaboration with Ant Miles and Shimon. In the same year Andy squeezed in his Wednesday night radio show on London's Kiss FM between global DJing commitments.