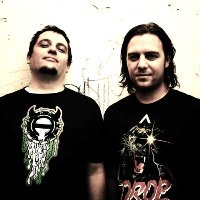 Counterstrike
"At the speed of sound we will be found"
Bio
Tactical, international, sensational and confrontational: no dark bass study would be complete without paying serious attention to Counterstrike. Renowned for smelting genres and pushing performance techniques to their limits, they are respected from the deepest, darkest, most discerning corners of the underground right up to some of the biggest labels in electronic music.

Decorated in every aspect of the industry, this unique London/Prague-based partnership has excelled as producers, performers, promoters and label owners since the late 90s. They currently boast over 100 releases on labels as rich and diverse as Dim Mak and Moving Shadow. Many of these releases have achieved Beatport D&B Top 10 and Beatport Main Top 20 status and have enjoyed full support from respected taste makers such as Mary Anne Hobbs, Black Sun Empire, Tech Itch, Dieselboy and John B.

This year alone they’ve torn up dancefloors in over 15 different countries from Russia to Greece to Mexico. As the founders of Algorythm Recordings and Counterstrike Recordings, they’ve hosted label parties across Europe to South Africa and signed material from some of the most ground-breaking, agenda-setting artists in action such as Audio, Limewax and The Panacea. Just like their own material, no releases on their labels go by without denting the download charts.

To understand this ever-increasing list of conquests and achievements, it’s wise to understand a little about their inspiration and determination: In 1995 Justin Scholtmeyer made a pilgrimage to London from his home base in Cape Town after hearing a jungle mixtape. Heading straight for the source, he landed a job at London’s most revered club The End where he became anointed by the stark sermons of Renegade Hardware. Exporting mixtapes back to his long-standing partner in grime Eaton Crous, a London/Cape Town pact was founded. When Justin returned to Cape Town, the duo established Homegrown. Heralded as the birthplace of South African drum & bass, their parties attained church-like status during its 100 party, 10 year lifetime where genre-defining guests were welcome from all corners, from Pendulum to Dieselboy to Camo & Krooked.

From their Homegrown roots Counterstrike’s crossbreed meld of drum & bass, dubstep, gabber and raw, undiluted bass has scored fans around the world. First signed to Allied Recordings in 2001, their prolific production regime expanded onto myriad agenda-setting imprints such as PRSPCT, Rottun, Human Imprint, Barcode, Evol Intent, Dim Mak, Obscene, Moving Shadow and many more. This consistency and range ensured them both national and international spotlights that have proceeded to get brighter and brighter as the years go by.

Now boasting a wider sonic scope than ever before, both Counterstrike releases and performances reference everything that’s exciting about contemporary electronic music. From their original uncompromising tech-entrenched D&B to dubstep and neuro, they pull inspirations from every corner and twist them with their own distinctive, hard-nosed motifs. Naturally there’s no better place to experience this furious fusion than their live performances; now armed with a mesmerising audio/visual show that incorporates next-level technologies to fuse unique graphics to every track, every switch, and even every frequency, Counterstrike have upped their game once again. Tactical, international, sensational and confrontational… Counterstike’s dark bass studies continue at a rapid pace. It’s time to pay serious attention.
Source: www.discogs.com/artist/Counterstrike