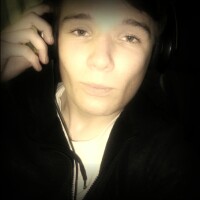 It's the alter ego of Frederik Van Hoof, who started producing in early 2011.

His music can be described as energetic darkstep and technoid with a little acid touch in it.

He has releases on free netlabels such as Psykotixx, NKS and Distorted Brain Function records.

He prefers working with hardware and currently makes his tracks with Yamaha RS7000 and Novation K-Station.
Source: www.darkdnb.com