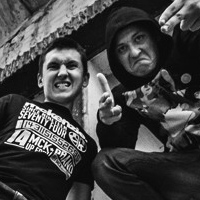 Agressor Bunx
"Dark Drum and Bass artist"
Bio
Agressor Bunx are a duo of two brothers: Alexander and Nikolay and are one of the most powerful Ukrainian projects in the Drum and Bass scene right now. Since the birth of the Agressor Bunx project in 2009 the twosome have released on prolific labels such as: Ram Records, Program, Eatbrain, Blackout, Bad Taste and Citrus.

Supported by the likes of: Andy C, DJ Hype, Noisia, The Upbeats, Black Sun Empire, Phace, Misanthrop, Audio, Jade and many more â€“ they are without a doubt the talk of the town, and rightly so.

In 2015 they featured on the massive Ram Records compilation: â€˜Ramsterdamâ€™ with their track called â€œTriceâ€, showcasing a different string to their bow: a more experimental sound, more atmospheres, soundscapes and old school vibes.

The guys have carved their own unique, distinct groove, united with immensely impressive production skills which has shot them straight to the front of every A-list DJâ€™s record box. A special mention needs to go to their track â€˜Tommy Gunâ€™ which was released on Black Sun Empires label â€™Blackout Musicâ€™ and subsequently conquered dancefloors and minds all over the world.

As 2016 gets under way Agressor Bunx release perhaps their best work to date in the shape of â€˜The Orderâ€™ EP: a supreme 5 track box of treasures on a label that is quite literally taking over the neurofunk scene more and more each day: Eatbrain. â€˜The Orderâ€™ EP was released in January and tells you all you need to know about the music that Alexander & Nikolay are creating â€“ unique, powerful and oozing of sonic groove.
Source: gramagency.co.uk/portfolio/agressor-bunx