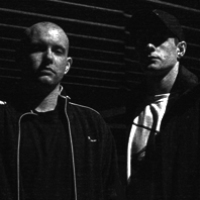 Unknown Error
"Dark Drum and Bass artist"
Bio
Since Renegade Hardware first picked up an Unknown Error tune back in 2004, there's been no stopping the born and raised Kent artist.

Unknown Error burst onto the scene with the debut release of "Shadows" on Renegade Hardware in January 2005 which featured on Hardware's first release of 2005, The Chronicles vol.4 EP. This release went straight in at no.8 in the BBC 1Xtra DnB Charts and was featured on the Guerrilla Warfare CD mixed by Grooverider. Tracks on Trouble On Vinyl, Cymbalism and one of Moving Shadow's strongest Eps - The Heaven & Hell EP - followed to take Unknown Error far beyond being newcomers.

The remix of the Kryptic Minds and Leon Switch's "More Like You" has been tearing up dance floors thought out world with heavy rotation from the likes of Andy C, Calyx, Teebee Diesel Boy, Noisia, Dylan, and Pendulum amongst many more, helping push it into the BBC 1xtra top 10 chart.

Unknown Error took the title track and the a-side of the sampler for Renegade Hardware's Album "Fear No Evil". Amongst this huge release is also a remix of the Universal Project Track "Bleach" .
Showing the more diverse side to Unknown Error's talent, along came the ever popular oriental vibes of "The Yearning" on Horizons Recordings.
Now that the Unknown Error duo have split and gone their own ways, one half of the production force aka the mastermind behind the decks has taken full duties to continue with the Unknown Error sound as a solo artist. Jim's first solo track as Unknown Error, entitled "Alone" has gained much hype and critical acclaim which featured as the A side on the "DreamThief LP" on Horizons Recordings, followed by the true stomper "The Curse" clearly shows Unknown Error is still a force to be reckoned with.