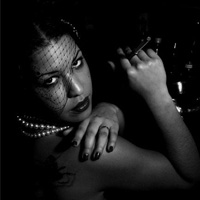 Robyn Chaos
"Let the Bass Kick..."
Bio
Our first Lady of Rage, Robyn Chaos, has firmly established herself over the last 10 years as one of the main forces in the darkcore, leftfield Drum and Bass scene, not only as a constantly touring, highly skilled DJ; but as a Singer, Writer, Producer, Promoter, Agent, and all around general Bad Ass. She lives, breathes, eats, and when she does sleep, it's all DnB, with a passion, pureness and honesty matched by very few.

As Founder and Managing Director of the dark enthusiasts DJ Agency, ANGER MANAGEMENT, tending to the diaries of Artists such as Dylan, Technical Itch, The Panacea, Audio, Katharsys, Aaron Spectre, Counterstrike, Limewax, Donny, Zardonic, and more; She has been instrumental in nurturing the long term, successful careers of almost every major darkside Titan in today's DnB World. Musically, Chaos has produced, written and sang as part of the infamous Faith in Chaos outfit (alongside long term partner in grime, Dylan) bringing the scene one of its most revolutionary, punk inspired vocal tracks, "Possession", as well as Metalheadz anthem (and still a favourite track of Mr Goldicus), "Salvation", collaborations with Bkey,"The Suffering", Audio,"Rapture", John Rolodex "The Way I Hurt You", and collaborations/remixes with The Panacea and Counterstrike on "Thunderstatement", Dkay & RawFull "I'll Be There for You", Technical Itch "Soldiers", and more!

Ms Chaos is the main organiser of "THERAPY SESSIONS" Worldwide, personally seeing to each and every event, working alongside local promotion teams/family on everything from line ups, flyer design, to procuring "nailing ballsacks into wood" performers (absolutely serious). From its humble beginnings as the wedding reception for Dylan and Robyn in 2002 (with sets from Bailey, Loxy, Ink, Keaton, Dylan, Trace and more!), Therapy rose from a midweek flagship event in London's East End to quickly become a major Dnb tour de force, slaying dancefloors, promoting mosh pit madness, and even winning national awards, in over a hundred cities a year across the Globe, from Ecuador to St Petersburg!! Without a dark shadow of a doubt, a lot of this success is due to the blood, sweat and blood stained tears, of this all encompassing, powerhouse of a Woman.

Robyn Chaos is one of the most recognisable names in dark Drum and Bass, playing regularly in across the Globe from the UK, to Buenos Aires!! In 2012, Chaos released consistently alongside The Panacea (Thunderstatement), Axiom & Treo (Rapture Remix), and the super collaboration with Zardonic, Gein and Counterstrike (Revolution), while touring extensively and running Therapy Sessions events around the World. 2013 marks Ten Years of Therapy Sessions, and she has been busy arranging anniversary nights across the continents, really perfecting her distinct vocal style and songwriting, like with “No Longer Human” alongside Technical Itch and "140 Conspiracy" with Fortitude, and starting up Therapy Sessions Recordings for tracks she believes shares the decade long ethos of “demented beats for disturbed minds” pacifying her loyal legions of Freaks and Freakettes with her exceptional taste in tunes from both renown artists and new blood!

Mixes available on the soundcloud site.