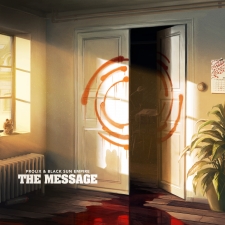 PROLIX & BLACK SUN EMPIRE transmit a slice of cutting edge audio via BLACKOUT with the release of BLCKTNL060: THE MESSAGE. Pairing PROLIX, who makes a quick return to BLACKOUT following his recent weighty release BLCKTNL056: “Slob”,with label heads BLACK SUN EMPIRE, to deliver a manifesto of auditory authority. Through THE MESSAGE this pairing deliver a refined single, designed for maximum sonic effect and tailored with utmost precision. From its opening and the ringing klaxon that sets the tone of their sonic directive, an urgent demand for a proper reception is extolled.

The crescendo of its intensity peaks, becoming more distorted as rolling snares rise to its flanks, before being cut as the first echoes of the approaching carnage wash into the present. A set of final instructions are issued within an atmosphere electrified by the incoming signal, following which THE MESSAGE is unveiled at full power. The sheer sonic force of the transmission’s bass frequencies sunder the air around it, which further ripples from the bursts of percussive energy that carry it. Frantic bass aftershocks buffet the listener, as those receiving the transmission still reel from its initial impact. A short lull in the transmission allows for a moment’s respite, but with the arrival of its second cycle a renewed set of waves, bristling with expertly directed sonic energy, wash over the listener. With THE MESSAGE, the unique and veteran pairing of PROLIX & BLACK SUN EMPIRE sees them broadcast a signal sure to carry their names & that of BLACKOUT far and wide.