The depth of the forest was unknown to those who lived at its verge. Shadows cast from the dense canopy seemed to reach out towards those who passed close by, wisps of darkness unfurling and twisting around the limbs of the youngest that dared to play at its sinister edge. The oldest stories of its roots passed across the creaking voices of the town pensioners hunched in the safety of others, discretely whispered and shot through with fearful looks. The allure of that dense and ancient place stretched back eternal, and bitter consequence waited for those who breached its dark heart. 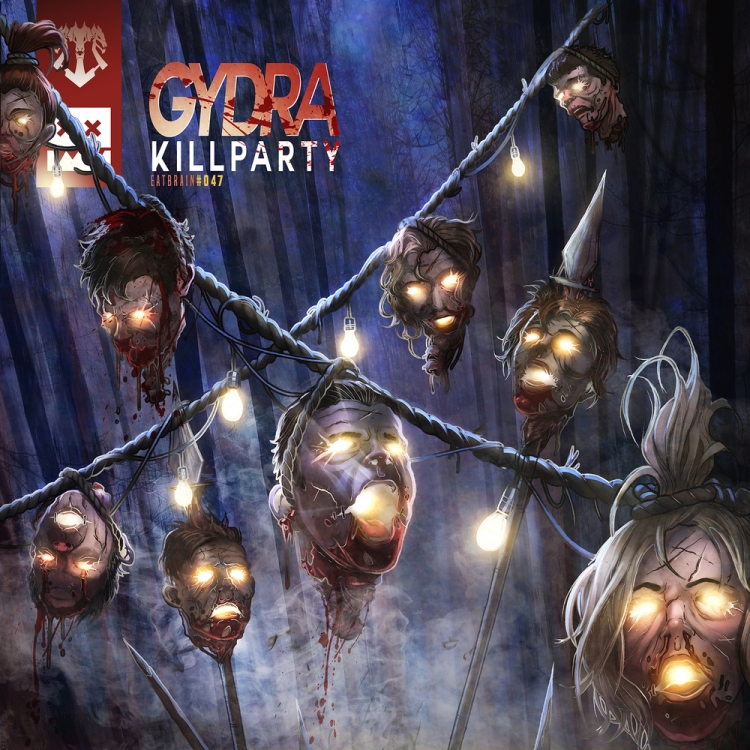 The crew ignored the nonsense of such crones, pulling the carts of equipment under the cover of dusk until the sounds of the town were but a memory. The speaker stacks were raised against the night, strings of lights hung between the trees and purity of disturbed bass rolled against the surrounding trunks as they disentangled themselves from the mundane fiber of the lives they left behind. Twisting against one another as they let flood serotonin delight, they ignited an orgy of sonic symbiosis as the rave found its wings and took flight. The spores drifted imperceptibly into the clearing from the darkness around, lodging without discomfort in the eyes, ears and noses of the gathered young. And then the screaming started, the undulating mass of the gathering turned inward... devouring itself as limbs were separated from bodies, necks ripped as skin tore loose and the blood flowed freely over the gnashing faces of those left alive at the KILL PARTY...

GYDRA return to EATBRAIN in force, following up their well-received CYBORG EP with the dynamic, darkly driven but funk-laced assault of the KILL PARTY EP. From the old-school drenched piano and ultrafunk of the title track, to the playful sinister intent of PRIMITIVE INSTINCT, the filthy sub explorations of PROBLEM and the predatory sensibilities of IKRA - the 4 tracks within display the dynamic and exploratory character of the production outfit. This is Russian neurofunk at its finest, delivered on the platform that's tailored exactly to the premiere kinetic nature of its content.