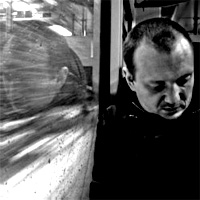 Dean Rodell
"Dark Drum and Bass artist"
Bio
Heading up the impressive Subdivision media entity, grouping 4 sub-labels as well as Berlin's new, but already well-respected 'Subland' club; Dean Rodell represents a significant force in the underground music scene. He has been involved since the early 90's, and is behind dozens of innovative, genre-fusing records and remixes on many of the worlds leading Techno, DnB & Bass labels

Deans innovative approach to music has led him to branch out into the worlds of Drum&Bass and Dubstep and in 2004 he created Subdivison Media to house a family of labels (Subsistenz, Subtrakt, Subviolenz & UF) and artists involved in all the scenes he loves in the pursuit of musical innovation.

This inventive approach has led Dean to work with many leading producers such as Current Value, Broken Note, Raiden, King Cannibal , The Panacea, Glenn Wilson, Patrik Skoog (DJAgaric), Senser, The Sect & Cooh to mention but a few, but is perhaps most apparent in Deans work with DnB producer Current Value as ‘Machine Code’ - the truest crossover of Techno & DnB and one of the most prominent acts on the ‘Technoid DnB / Dubstep & 1/4 step ’ scene.
Source: soundcloud.com/deanrodell