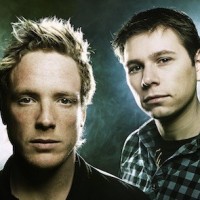 Ulterior Motive
"Dark Drum and Bass artist"
Bio
Fearlessly fusing raw elements of funk with precision percussion, the unmistakable Ulterior Motive remain sonically unrivalled and continue to set their own standards in 2012. Breakthrough releases for Subtitles, Metalheadz and Reinforced resonated deep within the underground to put their name on the map and remix requests from trance titans Above & Beyond plus Pete Tong’s legendary label FFRR have since followed.

Urgent and immersive, the duo’s contemporary take on the drum & bass template has won regular support from scene stalwarts like Andy C, dBridge, Friction and Hype along with DJ sets at institutions including Fabric, Star Warz and Sun & Bass. Driving forward with another momentous Subtitles single set for Spring, UM look set to tour Australia & New Zealand after a busy spell in the studio reshaping classic cuts from Future Cut and Klute. With their sound in constant evolution it’s impossible to predict exactly what will come next but with proven pedigree and the passion to keep pushing themselves further, you can be sure Ulterior Motive will stay two steps ahead of the rest.

James Davidson and Greg Hepworth joined forces in 2003 when they discovered a mutual passion for the kind of funky, technical and futuristic drum & bass pioneered by Ed Rush & Optical in the late-90s. Taking this as inspiration, they worked hard to forge a sound of their own by combining custom hand-built studio kit with modern production techniques before tentatively reaching out with early demos. The response was immediate and Ulterior Motive tracks have since become a staple for the very best selectors in the scene

Teebee was one of the first to recognise their talent, snapping up ‘Infrasonic / Holding On to Never’ for Ulterior Motive’s debut single on Subtitles. Summer 2010 saw two highly-anticipated 12” unleashed, ‘Featherweight / Glued’ and ‘2098 / Yoghurt Brainwave’, with both singles getting heavy rotation right across the board from Noisia, DJ Marky, Marcus Intalex, Alix Perez, Loxy, Calyx, Commix, Break, Icicle and Kasra to name but a few

Further releases have since followed on Metalheadz, Critical and Reinforced all in the last 6 months, including collaborations with Jubei and F.D, a remix for Rockwell and a prestigious picture-disk Enforcers EP repsectively. Now having raised the bar for themselves, Ulterior Motive continue to set the standard with both sides of their latest Subtitles release in May 2011 already dancefloor-certified by the likes of Hype, Ed Rush and Pendulum’s El Hornet. Following up ‘Tesla / Seven Segments’ will be ‘Divergence’ on Critical’s forthcoming various artists LP and more on Subtitles, the label they’ve helped to redefine and that Teebee now calls “the home of the squelch”
Their VIP rework of ‘Featherweight’ has also been keeping dancefloors busy lately and with exclusives like this often cropping up in their live sets first, it’s no surprise demands for their talents on the decks has also continued to grow. As well as representing regularly across the UK & Europe at top label nights including Metalheadz, Tru Playaz and Critical, the pair have played festivals including Sardinia’s Sun & Bass and proved to be to be highly-capable DJs in their own right.

Combining an open-minded creative approach with the technical skills and drive to bring their ideas to life, Ulterior Motive have already collaborated with the likes of Jubei, Rockwell, Zero T, Sabre and FD among others and have collabs with Phace, Hybris and Code 3 in the works in 2011. Demonstrating attention to detail, quality control and a strong work ethic, the versatile producers have their sights firmly set on the top with remix work from leading dance and drum & bass labels in the pipeline
Source: www.facebook.com/ulteriormotive.uk#!/ulteriormotive.uk/info