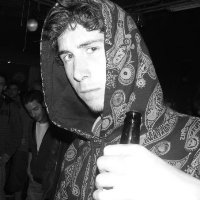 Greyone
"Dark Drum and Bass artist"
Bio
Greyone a Belgian drumnbass producer, started producing in 2004 at the age of 17. Signed to labels like : Mindsaw rec. , Bug Klinik rec., Hardline rec. , Manticore rec. and made a couple of releases on them.

His tracks can be described as hard dark drum’n’bass with much energy & influences from jungle and core.

..How it started:..
2004: Greyone was in a Hiphop collective "Dhe$" as MC Greyone and soon started to make his own beats. By experimenting alot he found his way in drum'n'bass

2007: He improved his tracks and soon he hooked up with the Belgian label Bug Klinik rec. who helped him with (international) gigs and suport.
this year he started doing Liveset performances. Not much later he signed into Mindsaw rec. (USA) and Hardline recordings (AU) and released his first (digital) tracks.
In the summer of 2007 he met Matar and togheter they played on many gigs back to back. Later on Greyone signed into other labels like :
Manticore (FR), Distortion (UA), Mindtech (BE)

2008: Greyone has his first vinyl release on Hardline Recordings (HLINE21). Together with Matar he performed at Therapy Sessions Latvia (march ’08)

2009 : Greyone focuses on his sound to have it clean and loud. Launch of MINDSAW RITUAL; a concept by Mindsaw Recordings USA

For bookings and info contact:
Mindsaw agency// bookings@mindsawrecordings.com
or just send me a pm with your request ;)
Source: www.myspace.com/greyonednb