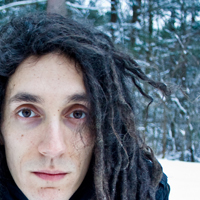 Drumcorps
"all love"
Bio
Aaron Spectre started off playing drums and going to all ages shows in the wasteland of suburban Massachusetts. He was fortunate to have been heavily influenced by bands like Converge, Bane, and Cave In during his formative years. As his interests shifted to electronic music, he moved to NYC, bought turntables, and started producing ambient, jungle and drum'n'bass. In 2003 he relocated to Berlin, Germany, to launch his music career. He released several vinyl 12”s, and soon found a following playing at squats and raves around Europe. Spectre founded Drumcorps to synthesize the unlikely mix of electronic music production values and the raw power of American hardcore. The result is not for everyone, but to Drumcorps' devout fans, it delivers: Drumcorps shows are notoriously high-energy, cathartic affairs.

Drumcorps' debut full-length, Grist, won an Award of Distinction at Prix Ars Electronica, a prestigious yearly prize whose past winners include Aphex Twin, Chris Cunningham, and Peter Gabriel. 2008-2009 was Spectre’s widest-reaching period to date, logging over 158,000 miles of travel, with gigs on four continents, including return trips to Russia and Japan, and debuts in Mexico, Taiwan, Australia and New Zealand. Spectre spent the better part of 2010-2011 putting the finishing touches on a much-anticipated follow up to Grist, as well as resettling in the USA.
Source: https://www.facebook.com/drumcorps?sk=info