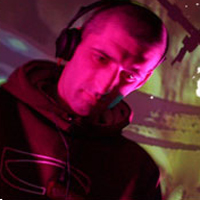 Bkey
"Dark Drum and Bass artist"
Bio
B-Key started listening to Electro and Hip Hop back in the mid ?80?s, getting into the Breakdance scene and competing in the competitions alongside Dylan. He was heavily into the music, and by ?89-?90, B-Key was going out to Raves like Biology, Energy, Raindance, Telepathy and weekly clubs like Camden Palace and Orange soon became a regular thing. In 1992 a pirate radio station called Raw FM started (which eventually became Rude FM 88.2) and B-Key got a regular set each week, which he still plays today every Sunday from 6-8pm.

Producing was a natural progression and soon B-Key teamed up with Dylan and released their first track in 1994 on Droppin? Science Vol. 9 under the name of Kosmos.

Besides playing across London and Europe, B-Key has also toured several times in the U.S., playing in cities such as Chicago, Cincinnati and Philly. He is also one of the residents at The Therapy Sessions at Herbal in London.