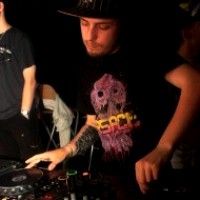 YmB
"Dark Drum and Bass artist"
Bio
Born in radioactive 1986 comes the Dutch madman, YMB.
Growing up as your typical 90's kid in the Rotterdam area in the Netherlands, he got brainwashed early with the fast sounds of rave and hardcore and kind of shaped him to the dj that he is today.

After discovering other genres, the Rotterdam drum n bass scene had the most impact on him so he started playing hard drum n bass around 2005 and started producing his own music in FL Studio 2 years later which he still uses.

2008 was the year that got him his first 2 releases on Ammunition Recs and getting noticed by various other labels and artists.

After various collaborations and greatly liking the results, mid 2011 was the start of his new project with fellow Dutchman, MathizM.
With their 4 deck and 2 mixer battles, no club will be left unscathed when they're done with their high energy showcase full of fast paced drum n bass, constantly mashed with hardcore, schranz and crossbreed!

2012 will also see the kick-off of his own imprint, called Ninth Circle Recordings, but more info to be announced :).