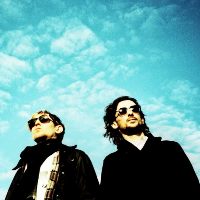 Vicious Circle
"Dark Drum and Bass artist"
Bio
The collective known as Vicious Circle began life in a South London flat in 2003. Having been friends since schooldays, and with a mutual love of music and in particular the brand of millennial techy D&B emerging from the genre at that time, the trio set out to make an impact in the rapidly expanding worldwide D&B scene.

After early remix work for long time collaborators Universal Project caught the attention of seminal D&B label Renegade Hardware, as well of some of the scenes biggest names, VC had their first release ready for the cutting room. Collaborations with Chase & Status and Corrupt Souls (now of Alvin Risk fame) followed, and DJ support from the likes of room 1 mainstays Andy C, Pendulum and Friction ensured that early VC material was not usually far from most DJ’s boxes. Rarely has such a strong debut been heard and the group was immediately catapulted to the forefront of the ‘leaders of the new school’ category. The gigs followed, and a residency at Renegade Hardware’s legendary night at The End club in London meant a constant flow of music from the studio directly to the dance floor.

In the early days, tracks such as ‘Between The Lines’ on Renegade Hardware’s Carpe Diem LP, ‘Hellrazor’ on UP Recordings, and their highly anticipated debut Hardware artist EP ‘Welcome To Shanktown’ set standards in sheer dance floor energy that few have matched. Mellower moments such as Blue Lagoon hinted at a less aggressive side to the team’s talents. Various techy floor-friendly offerings on Hardware were followed by a bass heavy 12" for Shy FX's Digital Soundboy imprint and releases on label of the moment Critical Music which cemented their reputation as having more to offer than the techy sound they were rapidly becoming known for.

Their talents have led to a number of high profile collaborations with the likes of Brit Award nominated Chase & Status, the legendary Dom & Roland, American EDM stalwarts Evol Intent and Ewun (now of Kill The Noise infamy), and new skool heroes Jubei and Sabre. A reputation as remixers with the magic touch has spawned a number of smashers such as their monstrous take on Mindscape & Chris SU’s ‘Planet X’ and even alerted major label Universal to their talents, interest which resulted in their dance floor filling ‘Body Baby’ remix for NY rap veteran Pharoahe Monch.
Long player ambitions were fulfilled in 2010, with the arrival of their long awaited collaborative album with Universal Project, ‘Broken Silence’, on their fledgling imprint, Siren Records. Club anthems such as 'Snorkel' became DJ essentials and generated widespread critical acclaim, culminating in the LP being voted into the top 5 albums of 2010 by KMag. Tracks from the album and a collaboration with Fierce on his Quarantine label appeared on Andy C's Nightlife 5 collection as well as DJ Marky's Fabric Live CD.

Extensive touring in Europe and the US, Japan, Australasia and elsewhere has ensured few territories have yet to feel the wrath of a VC DJ set. UK radio appearances on BBC Radio 1xtra and Kiss FM, plus a cast of many legal and not-so-legal radio stations have also been warmly received and have helped VC gain a loyal fan base across the globe.

2011 was a busy year for the boys, with various musical collaborations with Fierce seeing the light of day, as well as a release for the highly anticipated ‘Last Chance Saloon’ on cult label Commercial Suicide. A podcast for Goldie’s legendary Metalheadz reached number 4 in the UK iTunes podcast chart, prompting calls from Goldie for VC to get working on their Metalheadz debut. 2011 also saw the lineup change to include just Simon and Andrew, as Dan moved into other areas of endeavour in his life. However, the creative force remains and early 2012 has already seen Vicious Circle back to their productive best, even venturing into the realms of dubstep and beyond in their search for sonic supremacy.