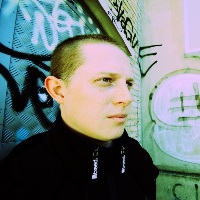 Optiv
"Dark Drum and Bass artist"
Bio
Drum & Bass producer from Cause4Concern. Releasing music for the best part of 14 years, Optiv, otherwise known as Edd Holmes has been an integral member of possibly one the most influential Drum & Bass collectives the scene has ever witnessed.

When Optiv?s music career began the term MP3 was a mere twinkle in the eye of future music format and at this time acetate was the preferred method for documenting. It?s clear to see that with his music being pressed to vinyl on over 20 different labels he has earned his colors and stripes as a master of his trade.

2002 saw the beginning of Optiv?s own imprint, Red Light Records, where he released the labels debut 12? ?Strangeways? b/w ?Flatworm? and since then the label has seen lots of solo work plus collaborations with Axiom, Chris.su and Rymetyme on tracks that optimise the Red Light sound, techy, rolling and always at a super high production level.

Now living in Switzerland, Optiv continues to deliver outstanding music through Red Light and with the re-ignition of Cause4Concern and further projects in the pipeline, 2012 is set to be an exciting year!
Source: www.facebook.com/djoptiv