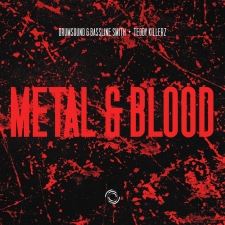 Bass generals DRUMSOUND & BASSLINE SMITH & beat assassins TEDDY KILLERZ debut their newest creation on BLACKOUT with the single “METAL & BLOOD”. Needing no introduction, DRUMSOUND & BASSLINE SMITH bring 20 years of adroit & tactical production knowledge to the table, with a vast arsenal of tracks that have garnered them a heavy reputation for their destructive capabilities. The unrelenting ursine trio known as TEDDY KILLERZ burst into the drum & bass scene in recent years with a slew of releases across labels such as RAM Records, Eatbrain, OWSLA, amongst others, becoming known for their ruthless approach to production and a rave decimating ideology.

Through the intense collaboration between these two titans, DRUMSOUND AND BASSLINE SMITH and TEDDY KILLERZ bring forth a devastating audio assault that pushes systems with fire and fury. Called to arms by an invigorating speech at its outset, the churning rage of this sonic slaying machine charges to its full power before unleashing a cataclysmic bombardment from its main weapon, leveling the dance with explosive kicks and a pulverizing metallic bassline. Scant time is given to any survivors of the initial offensive as the weapon is retargeted before being loosed once again for a final salvo, devastating any remaining defenses and emerging victorious in sonic supremacy. With BLCKTNL059 “METAL & BLOOD”, the six man squadron that is DRUMSOUND & BASSLINE SMITH X TEDDY KILLERZ have crafted an unstoppable audio apparatus set to carry themselves and BLACKOUT onwards to further triumph.