Following up the viciously effective PROPERTIES OF ADDITION sampler EP that landed heftily in raves worldwide in March, comes the powerful full-length debut LP from the fresh might of Ukrainian duo AGRESSOR BUNX. They emerged with force onto EATBRAIN with 'The Order' EP in 2016, tearing a ragged furrow through the year and rapidly rising to the apex of the drum & bass sphere with releases on Blackout, Trendkill, Bad Taste and RAM. With the duo featuring heavily at Eatbrain live shows, they've seared their sound deep into the hearts of the label's massive crew and quickly become embedded in the core of their aesthetic. Now with the release of their first LP on neurofunk's premiere label, they have delivered a sharp array of cutting-edge, diverse and hard-hitting forms of drum & bass, alongside mutated forms of the genre that push expectations and offer intense weapons for the rave. With the PROPERTIES OF ADDITION LP, Agressor Bunx stake out a fierce and advanced sound field at the refined and heavy edge of drum & bass, delivering the speaker-pulverising LP that their fans have been waiting for. 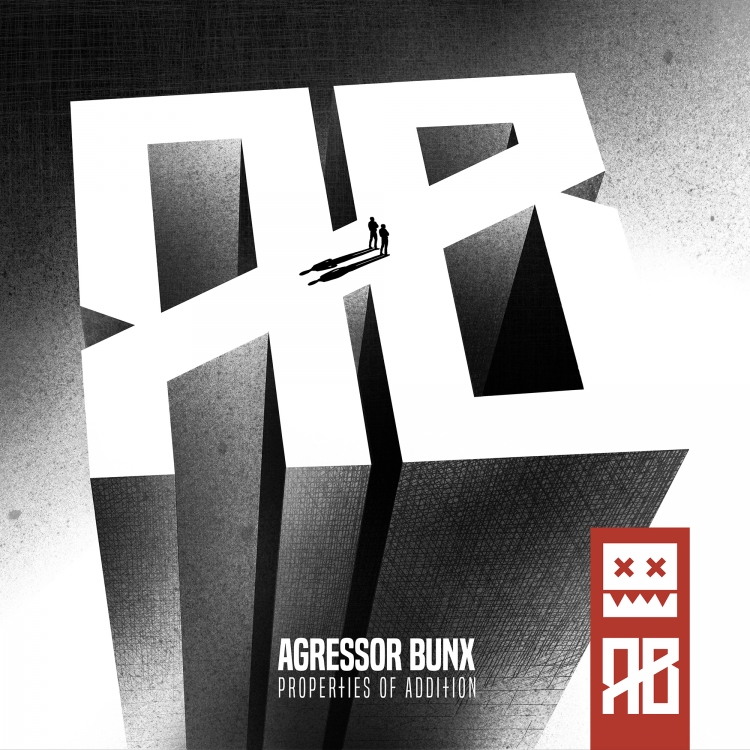 The album kicks off with a dark intro track which shows a lot of promise and sets the tone for this album. The intro made us rather curious what this album has to offer. Read our track by track preview to learn what this Ukrainian duo is all about.

The Second track “Adamant” starts with a mysterious sci-fi intro. The first drop is nice and dark, but not too heavy. The slightly crunchy reese synths give the track an underground feeling, which we like very much.

The third track “Bleak Shadows” is a bit darker than the last one. Also quite nice. The track has a bit of an Oldschool vibe to it.

After Bleak Shadows it's time for “Pumping”. Pumping is a bit more experimental than the last few. The main melodyline constists of an irregular and deviatingly sounding rhythm. Though structured, the interval of the sounds give it a sick twist. It takes some balls to release a track like this, but we like it!

The fifth track on the album is called “Creep Show” and is also very experimental.

“Cloudlight” is a bit of a slow technoey track which playes at around 128 BPM.

Track number 7 “The Offering” start off with a simple melodyline and snare pattern, but soon becomes darker and more complex. The tune has a bit of an eerie feeling to it. Great tune!

“Jungle Future” has a bit of an Oldschool vibe to it. The track feels uplifting with a spacey melody.

The ninth track “Human Element” also has bit of an Oldschool vibe to it. The Crispy 'n Crunchy Reese really gives it character. The Synth has been transformed to a sort of electric noise, which sounds awesome!

“Smoke The Competition” is nice and uplifting. Not much to say... “it just works”, which is good.

“Ninja” reminds us a bit of the old Jungle sounds of the 90's.

“Diffusion” is a solid and dark track. In the break a surprising and mysterious melody ascends, followed by a lovely drop. The vocal “I wouldn't lie to you” really fits in.

“Thunder” is a much lighter and colourful track.

The fourteenth track “Mental Strain” is a short track. This one also start off with a Sci-fi styled intro followed by an awesome drop. In our opinion this is one of the best tracks off the album and we would love to hear this one as a full length track! Great stuff!

“Radical Sound” has some surprising pitch shifts in the bass and some nice flanger effects on the synth.

Track number 16 “Spit that Verse” has a great drive to it. The track just makes you want to move. The alterations in the Breakbeat and all these little extras keep it alive and powerful. Great tune!

“Pure Energy” is an other nice experimental track

The Final track of the album a real dance floor BOMB! The track is called “Twisted” and has such a great drive. The screechy sounds give it lots of character and make it sound so dark. Just try to keep still on this one... We dare you!

All in all it's a great Dark Drum 'n Bass album with lots of surprising edits and variational tracks. The release date is set for the 29th of May. Go and get it!