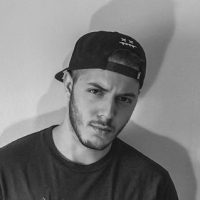 L 33
"Dark Drum and Bass artist"
Bio
Over the past few years L 33's intricate production skills have helped place Bulgaria firmly on the D&B world map. His impressive back catalogue has seen releases on highly respected labels such as Program (RAM) Eatbrain, Rise audio, Titan, Bad Taste and Lifted Music. Supported by the the likes of Noisia, Andy C, DJ Hype, Dillinja & many more, this 22 years old is a producer to look out for. There's so much more to come from L 33 and those signature dark and futuristic vibes certainly won't disappoint

In 2013, he released his track "Discrete" as a part of Andy C Nightlife 6 compilation. Getting involved with RAM records helped him put out his debut single on Andy C's sub imprint - Program.

2014 brought him big success after releasing his single Melt/Let Loose on Addictive Behaviour. The end of the year was exciting for him, after signing his track "Saviour" exclusively on D&B Arena 18 Album. Scream EP on Eatbrain is definitely one of his signature releases of all the time. After it, Dayan works constantly with the label.....
Source: https://eatbrain.net/l33