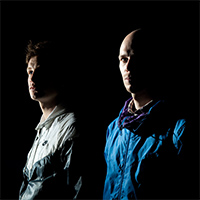 June Miller
"Dark Drum and Bass artist"
Bio
Trace the very tendrils of drum & bass and youâ€™ll hit hardcore. Acid houseâ€™s ugly little brother, its extremities resonated with a whole generation, boosting them with an energy and focus the dancefloor had never experienced before. Trace the very tendrils of June Miller and youâ€™ll hit a wholly different type of hardcoreâ€¦ But a very similar story.

A transcontinental duo, Mark McCann and Bart van Dijk met under bizarre circumstances. Mark ran a small independent record label in the UK, Bart played guitar in a Dutch hardcore punk band Deluge. Neither of them knew of each otherâ€™s existence. One morning Mark received Delugeâ€™s album â€˜Spot In The Shadowâ€™. Unsolicited, to this very day he still doesnâ€™t know who sent the CD to him. Pressing play, the bandâ€™s uncompromising energy and attitude instantly inspired him. He picked
up the phone and organised a UK tour.

Extensive jaunts around Europe, during which Mark and Bart had formed an incurable alliance. Bonded by the fine balance of hardcoreâ€™s beauty and brutality, they started exploring other genres of music, eager to find the same unabated spirit they loved so much. It didnâ€™t take long before they struck gold: drum & bass. The ruthless sound design, the unashamed drive and fiery tempered tempos; the switch came naturally.

Applying their musical knowledge and intuition to drum & bass they got to work, picking up production skills and learning the sceneâ€™s roots with the fever that initially united them. Within a year they felt confident enough to get their material out there. June Miller was born.

They wanted something ambiguous, something you canâ€™t quite define, something you have to dig a little deeper to understand. With a brazen, diverse sound that matched the name, June Miller soon took the world by storm.

Within a year the duo had already scorched the scene with their distinctive, no-holds-barred technique. Renegade Hardware legend Loxy was the first to pick up on their talent and potential, signing them to his well respected label Cylon. A â€˜Best Up & Coming Actâ€™ accolade at the Dutch Drum & Bass Awards soon followed. As did releases on Horizons, Deep Soul, Renegade Hardware and Criticalâ€¦ Each release revealing a new depth: Icy tech-laced rhythms, savage bass sneers, forthright melodic hooks and complex sonic textures. Each release securing them more bookings around the world from Croydon to Croatia.

It wasnâ€™t long before they attracted the attention of Ram Records. Andy C had been following them since their very first release and made the bold move to sign one of their most distinctive releases to date: â€™64 Thousandâ€™, featuring Mark and Bartâ€™s old friends, a hardcore band named Secret Handshake Club.

A rocket-fuelled boundary-breaking fusion of June Millerâ€™s biggest passions past and future, â€™64 Thousandâ€™ was unlike anything else on the scene. Released on the labelâ€™s new-talent- hyping â€˜Dimensionsâ€™ series it caused tremors across the globeâ€™s dancefloors. Maxing the rave richter scale to breaking point, it forged an exciting new relationship with Ram Records. A relationship thatâ€™s cemented a new level in June Millerâ€™s career.

2012 saw the duo go into disciplined studio hibernation. Crafting a whole new legion of tracks for Ram, refining their sonic skills to a whole new level. Devout evangelists of the of both hardcore and drum & bassâ€™s extremities, June Miller resonate with an exciting energy and focus that the dancefloor has only just started to experienceâ€¦