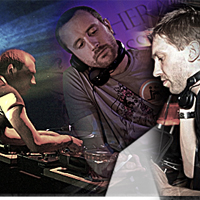 Their first release came in 2006, and after a remix of Audio’s ‘No Soul’ for Habit in 2007, the following year brought solo releases on Habit, Freak and Obscene. This pushed the trio into the scene and secured gigs at Therapy Sessions after being signed by Anger Management.

2009 saw Future Signal playing out around Europe in cities such as Porto, Kiev,Gdansk, Budapest, Rome and of course their home city of London. A collaboration with DJ Audio saw a release on Teebee’s imprint Subtitles, from which they received a great response. Exploring the ‘neuro-funk’ side of their producing led to releases on Disturbed recordings and hasled to collaborations with Proktah, Maztek and Zero Method which have all delivered great results.

This year is set to be one for building on these foundations, with more collaborations planned and forthcoming tracks on M-atome, Flight Recordings, Focuz, Subculture, Sinuous, Order in Kaos and many more!! Future Signal are now being represented by Tom @ Grassroots and are available for dates throughout 2010 and beyond!
Source: www.myspace.com/futuresignal