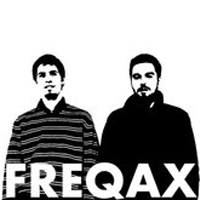 Freqax
"Dark Drum and Bass artist"
Bio
FREQAX (short for Frequeny Axe) is a music production project conceived in 2008 by ADRENALINA (aka C9H13NO3) and WEIRDO on the ground of their 2 different original styles mixed on the colaboration tunes that they made together, and their many b2b party sessions performed. It relies on a new form of music languages and genres under a single project based on the knowledge gathered over the many years of experience.

They both liked electronic music since they were kids, but the bigest inspiration in their music life was "The Prodigy". They discovered "drum and bass" genere in the late 90's and they started producing it in the early years of 2000's. They made electronic music long time before they met, but when they placed their styles together it sounded like a close family of sounds and rythms banging your heads and pleasuring your ears like never before.

They lived their youth in different places - Adrenalina in Sinaia (small City from Romanian Mountains) and Weirdo in Bucharest (Chapital of Romania) - so this is one of the basic motive why they have different perspective in alot of things, wich in this project is a good thing as it may seem from the result of the different vibes placed together in the tunes they made.

These so called "Ax Brothers" met in 2006 when they joined Darkeast kru which gave them the chance to play together at many gigs alongside big dnb producers and dj' like DYLAN, TECHNICAL ITCH, LIMEWAX, CURRENT VALUE, EWUN, EVOL INTENT, PANACEA, BSE, NOISIA and more.

They made a few production colab's before, but they decided to make them under a single name in 2008 because of the huge succes that they had together in Romania at Darkeast's and DROPDREAD's events.

In 2009 Freqax reveals itself along with its first signed release "The Ax" at Algorythm Recordings. The next big thing for them was their first 12" vinyl release at Prospect Recordings in July 2010 which is out now and u can buy it to suport the band.

Freqax have a few more forthcoming dnb and dubstep releases so keep your eyes open for more.
Source: www.facebook.com/fr3qax