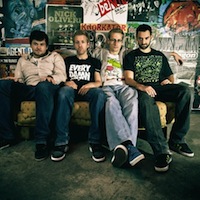 Fourward
"Dark Drum and Bass artist"
Bio
Hailing straight from lower Austria the four men collective FOURWARD started out producing music in early 2007. The boys knew each other for quite a while and shared the love and passion for drumandbass music .It was kinda like a fun thing when they played around with making some tunes at the beginning.

But soon their production skills improved very quickly and people around them started to take notice of their musical output and it turned into something more serious. For them it was always a main issue not to stick to any particular tiny subgenre only, but to develop a sound
of their own.

All members have different musical backgrounds which fit together perfectly and provide a great studio vibe. Days went by and the boys finished a couple of tunes properly and it wasn?t long until Austrian drumandbass producer duo Body&Soul showed interest in their works.
Also international artists like BBC's very own Crissy Criss began to support their music giving them airplay on his radio show. As a result of their effort FOURWARD have now signed some tunes to labels of the likes of Subsonik Sound, Planet Funk or Fokuz which are perceived very well so far.

Fourward expect the year 2009 to be a big one ? being hired for the notorious Urban Art Forms family and continuing to eagerly develop their musical craft its inevitable that the boys will find their way into the international drumandbass circuit.